Chemotherapy is imperfect—most drugs are. But I absolutely support its use for cancer treatment when called for as the approved standard of care, when there is solid potential to ensure a durable remission.

If you have read my new book n of 1, my other writings, or the published clinical report on my case, you know I refused chemo. So what’s the deal? Am I a hypocrite, sending mixed messages to those on a cancer journey looking for hope, and alternative healing options?

This post should clarify where I stand on this important issue.

Past, Present, and Future

Chemo is a largely antiquated therapeutic approach to cancer care. It’s a ‘buckshot’ attack focused on hitting the target while causing collateral damage to healthy cells. Many chemotherapeutic drugs have been around for decades. They are toxic, cause deleterious side effects too numerous to list here, and can result in subsequent damage to other organs—they may lead to secondary cancers over time.

At the same time, fascinating research focusing on fasting and chemotherapy, and chronomodulated chemotherapy, are among interesting delivery methods and approaches that may increase the effectiveness of some of these drugs.

However, with all of the newer targeted therapies like kinase inhibitors, checkpoint inhibitors, monoclonal antibodies, and other agents, it’s a wonder we still use chemo. In fact, many who work in the field of oncology believe chemo agents will be largely phased out and replaced with more targeted therapies over the next decade or two.

But we live (and get treated for cancer) in the here and now, and I personally support the use of chemo for cancer care when shown to have high probability of getting patients into a disease-free and durable remission state. That said, I also believe in ‘protecting the host’, as I will explain.

In 2003, after 12 years of being symptom-free of chronic lymphocytic leukemia, I became very sick and was hospitalized. The then standard of care comprised steroids, a couple of chemo agents, and a newly approved monoclonal antibody. The combination produced arguably better outcomes than what was offered at the onset of my CLL in 1991, but was still palliative, not a potentially ‘curative’ approach. It did not offer the more durable solution I was aiming for.

I also knew that this treatment would, long term, make the leukemic cells less sensitive to the same agents if repeated in the future. This is called chemo-resistance. Essentially, a less effective therapeutic outcome from future treatments.

So I refused chemo. Not categorically—I wanted to extend my self-created treatment to see what might be possible through my own devices. And, it turned out I didn’t need to access conventional therapy.

I knew the standard of care drug cocktail was available to me and I was grateful for that. I was not going to die, at least not immediately, based on what the labs showed. The autoimmune hemolytic anemia, night sweats, persistent low-grade fever, and fatigue were debilitating. I kept a close eye on my labs—my blood chemistry was monitored to see where I was at.

When I decided to ‘punt’ on what conventional therapy had to offer at that time, no one was fired. My oncologists didn’t abandon me, and I remained fully engaged. They were not angry. There were no lectures or heated exchanges. We formed a cohesive team.

My esteemed Harvard and Hopkins oncologists didn’t know what I might do in lieu of immediate conventional therapy. Candidly, I didn’t know exactly either. But we had a mutual respect, and a tacit understanding that, if my approach failed, I would jump on the prescribed ‘conventional’ therapy to obtain symptom relief.

I would go on to experience a remarkable clinical outcome from that acute episode in 2003, without being treated conventionally. However, let me be clear: if the highly effective and targeted kinase inhibitor Ibrutinib had been available to me as a first line therapy, I probably would have gone for it.

Though not considered a curative therapy, Ibrutinib is an orally administrated drug proven to be both effective for certain types of CLL, and to have minimal side effects, at least in the shorter term. At about $10,000 per month, it’s also quite expensive.

That was my individual experience.

Let me say now that the following case, one person, an n of 1, is anecdotal and has not formally been published as a case report.

A close friend was diagnosed with a rare metastatic Ewing’s Sarcoma. The prognosis was poor. Ewing’s is so rare that the medical literature largely comprises studies involving extremely small numbers of participants, often fewer than 100.

Upon review of the various studies, and in consultation with the Ewing’s experts at the National Cancer Institute and Harvard, the scant literature base showed nine different chemo agents, in various cocktail combinations, showing effectiveness at some level for Ewing’s Sarcoma. In theory, these agents work on different disease pathways.

The decision was made to move forward with these nine agents, in different combinations, administered over a fifteen-month period. Prior to this chemo cocktail, two surgeries took place as well as radiation therapy. The entire punishing regimen neared the limits of what a person can endure.

However, there was something different about the entire clinical approach to this case. Whereas the conventional cancer treatment was focused solely on the disease itself—the tumor burden of Ewing’s Sarcoma—a comprehensive integrative oncology program was added to support the host: AKA the patient.

The patient was supported at the highest level from a nutritional standpoint—both through an anticancer diet, and via select, targeted dietary supplementation all of which were informed by blood work.

An exercise regimen was created specifically for the patient and was based on where she was in the treatment cycle, her level of fatigue, and overall physical condition.

Because the patient received a considerable amount of chemotherapy (and many other drugs and interventions), the oncologists suggested that hospitalization would likely be needed after each powerful treatment cycle to recover from infections caused by a super-suppressed immune system. This was not the case. Incredibly, the patient logged exactly one short hospital stay.

Instead, the patient participated in daily physical activity at some level during active treatment, even when severely fatigued. This was mostly through walks, protected by wearing a face mask. After each heavy treatment cycle, her blood chemistry bounced back much faster than her oncologist expected.

Five years since treatment, the patient continues to be free of disease—commonly referred to as ‘no evidence of disease’ or NED in oncology-speak.

Again, this is one anecdotal case. But I have repeatedly seen these types of cases over the years. Patients who create, and then adhere to, appropriate and healthy lifestyle modifications, and receive the additional support needed during active treatment, tend to fare better—often much better. The side effects from chemotherapy can by reduced dramatically. And, when a quality-directed integrative approach is fully engaged, a patient can typically receive an uninterrupted prescribed course of therapy, thus ensuring the therapy’s intended effectiveness

Proactive patients place themselves at the center of their own care. They don’t ask permission. They just do it. And through this collection of sustainable efforts, their underlying immune system is typically not as debilitated and immunosuppressed as the cancer patient who does none of these things.

Moreover, adherence to anticancer behavioral modifications and other supportive care, focusing on an integrative oncology approach, may also result in longer, durable remissions.

Though I refused chemotherapy in my own treatment because it was not considered ‘curative’, I support its use as a first line treatment when evidence supports its effectiveness for potential durable remission outcomes.

Patients have the right to refuse any recommended therapy for any one of a number of personal reasons, including quality of life decisions.

When solely natural approaches are chosen in lieu of treatment options shown to be effective, this is alternative medicine, and can often result in reducing or even eliminating the period of time during which proven conventional therapies can be most effective.

Lifestyle approaches including diet, physical activity, stress reduction and well-placed dietary supplements may greatly reduce the often deleterious side effects of chemotherapy (and other treatments). Incorporating these things may also allow patients to more easily stay on the prescribed therapy without interruption, therefore increasing its intended efficacy.

Explore your disease in a private session with Glenn that examines both integrative methodologies and conventional medicine.

You Are the Difference

Wait! Don’t leave without your free excerpt from n of 1. 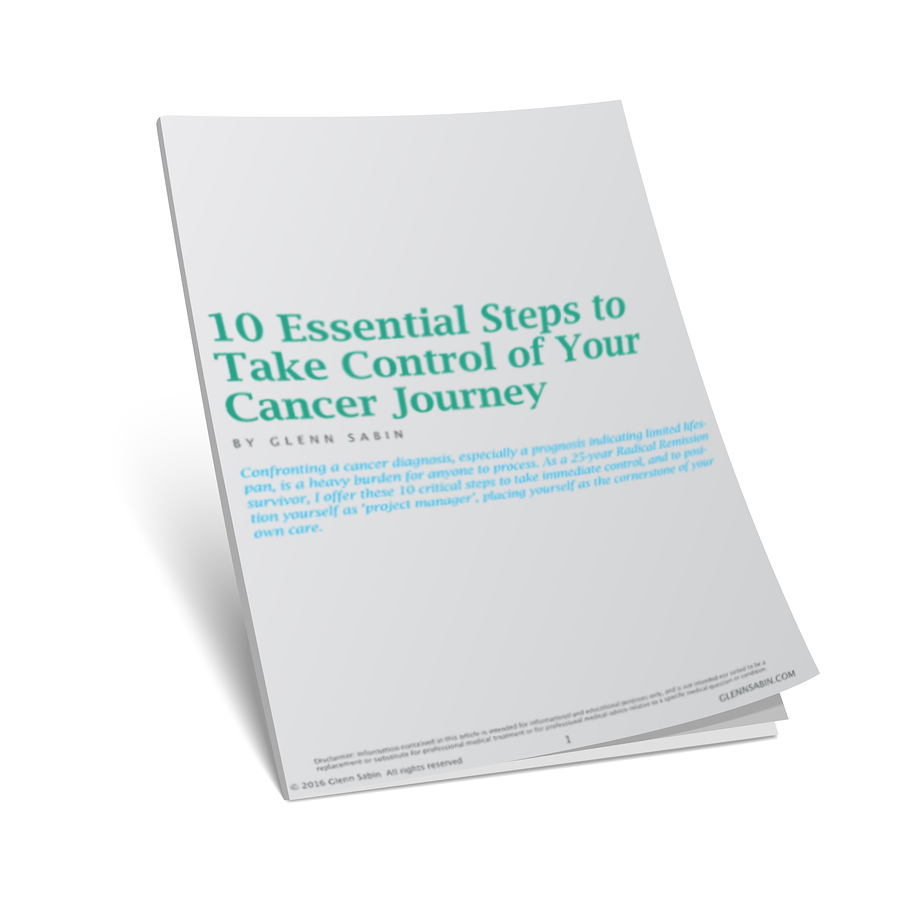 PLUS: Bonus Guide—10 Essential Steps to Take Control of Your Cancer Journey

{"cookieName":"wBounce","isAggressive":false,"isSitewide":true,"hesitation":"30","openAnimation":false,"exitAnimation":"fadeOutUp","timer":"","sensitivity":"","cookieExpire":"45","cookieDomain":"","autoFire":"","isAnalyticsEnabled":true}
By continuing to browse the site you are agreeing to our use of cookies.
Get your free excerpt from n of 1.

PLUS: BONUS GUIDE—10 ESSENTIAL STEPS TO TAKE CONTROL OF YOUR CANCER JOURNEY
No Spam, Just Frequent Articles Packed With Insight.